Jim said: I hated it.
Allen said: If it had been a foreign film with no subtitles I would have liked it a lot.

Lauretta and Susan and I agreed: It had moments.
I … Read more 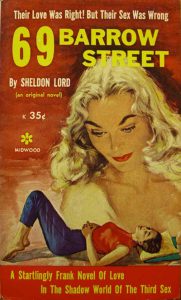 Does Lawrence Block belong to this esoteric tribe? One thing is for sure: before becoming END_OF_DOCUMENT_TOKEN_TO_BE_REPLACED

There aren’t a lot of lesbian kisses on screen. Especially in the 1930s. In Japan. But this is one of the best. END_OF_DOCUMENT_TOKEN_TO_BE_REPLACED 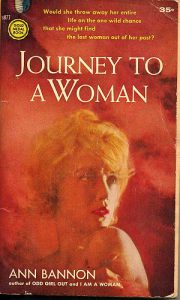 It took me many years to appreciate Ann Bannon’s contribution to lesbian literature. Bannon wrote five pulps between 1957 and 1962, linked novels that tell the intertwined, melodramatic adventures of Laura, Beth, and Beebo. The books made her END_OF_DOCUMENT_TOKEN_TO_BE_REPLACED

The Plot: Orphaned outcast Jean Grant is so desperate to get out of her hick town and discover her “true nature” she elopes with sensitive Tim, the unhappy son of the lecherous druggist (who is also Jean’s employer). After gritting her teeth through their wedding night, Jean steals Tim’s $1000 nest egg and hightails it to New York. There she checks into a cheap hotel and sets out to explore the city, alternately racked by guilt and overflowing with delirious joy at her newfound freedom. END_OF_DOCUMENT_TOKEN_TO_BE_REPLACED 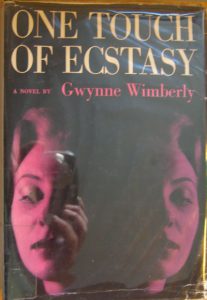 One Touch of Ecstasy, by Gwynne Wimberly, Frederick Fell, Inc. 1959.

Best line: “There’s a reason we teach you correct posture. If your pelvis isn’t tilted forward, the organs in the area are affected unfavorably.”

The Plot: Poor Louise, married and with an eighteen-year-old daughter has never had an orgasm. Ever since that date-rape in college she’s been all twisted up inside, and marriage hasn’t helped–she’s mired in suburban misery. “The hollandaise had been spectacular” but that can’t disguise the fact that her life is one “cruelly civilized evening of superficiality and loneliness” END_OF_DOCUMENT_TOKEN_TO_BE_REPLACED 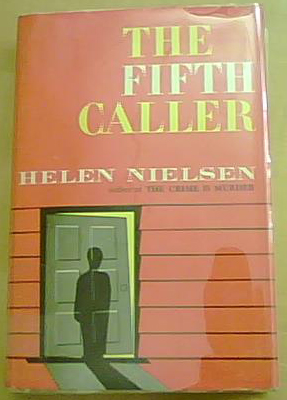 Isn't it keen how the reflection of my cell phone mimicks the shadow of the murderer?

I was looking forward to Helen Nielsen’s The Fifth Caller (Morrow, 1959) from the Grier-McBride collection–the library catalog lists “Lesbian physicians–Fiction” as the second subject. Alas, only a completionist collector like Barbara Grier would put this rather dull mystery with its few elliptical references to sapphic tendencies in her lesbian library.

The Plot: Dr. Lillian Whitehall has been found dead in her office and all evidence points to her nurse. Nursie can’t defend herself, because she was found unconscious on the beach with her wrists slashed and has no memory of what happened that day. Tall, square-jawed D.A. Investigator (I’m sorry–I’ve already forgotten his name) thinks Nurse Anna is awfully pretty though, END_OF_DOCUMENT_TOKEN_TO_BE_REPLACED 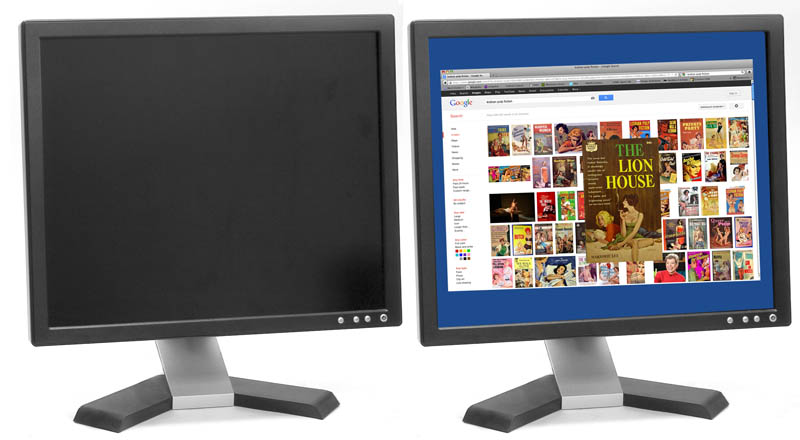 This means work for me, pleasure for others

I’m not a fan of the internet. I’m an old-fashioned gal who prefers knitting while listening to Alan Farley talk about his Noel Coward obsession on the radio to web surfing. I was violently against ebooks until a royalty statement made me change my tune (turns out I’m making money from them!). END_OF_DOCUMENT_TOKEN_TO_BE_REPLACED 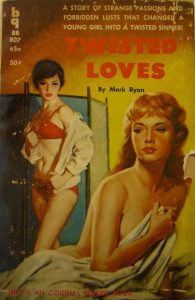 “A story of strange passions and forbidden lusts that changed a young girl into a twisted sinner!”

END_OF_DOCUMENT_TOKEN_TO_BE_REPLACED 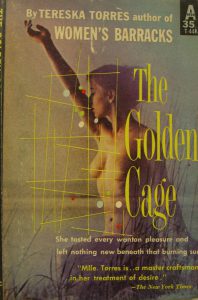 The Golden Cage, Tereska Torrès (1959, Avon, published by arrangement with the Dial Press)

“Miss Torres is a very naughty Aphrodite presiding over a multitude of libidinous extravaganzas.” (Parade of Books)

Some pulps are meant to be skimmed, and the works of Tereska Torrès belong to that category. She favors the Grand Hotel approach to fiction: a group of disparate people are brought together by unusual circumstances and Tereska tells us a series of colorful, unrelated stories about them. She used this technique in Women’s Barracks (1950), the ground-breaking pulp that started the craze for paperback lesbians, and she uses it in The Golden Cage, one result being that you have to search for the lesbian content in the midst of the mostly heterosexual shenanigans. The set-up in Women’s Barracks is that a group of women are brought together when they join the Free French troops during WWII. In the Golden Cage it’s END_OF_DOCUMENT_TOKEN_TO_BE_REPLACED