There aren’t a lot of lesbian kisses on screen. Especially in the 1930s. In Japan. But this is one of the best.

Dragnet Girl isn’t really about Tokiko (Kinuyo Tanaka), an office girl who vamps her employer à la Babyface by day and parties with her bad-boy boyfriend, the sultry Joji, at night. The story revolves around Joji and his relationship with a young gangster-wannabe, Hiroshi. Hiroshi has a sister, Kazuko, who’s trying to keep her kid brother out of trouble, the way sisters always do in gangster movies.

So Kazuko frets about Hiroshi, Hiroshi has a crush on Joji, Joji is interested in Kazuko, and Tokiko gets jealous. After one of the other gangster molls twits her about Joji hanging around Kazuko, Tokiko goes looking for the good girl in order to tell her, “Hands off.” And she takes a gun along.

Tokiko finds Kazuko working her day job at a music store and asks her to take a walk. “Okay,” says Kazuko, a little curious, and off they go. Ozu keeps cutting to their feet, and the two actresses manage to express their diametrically opposed characters just by the way they walk. Tokiko’s in the lead, all rat-a-tat-tat in her heels, and Kazuko shuffles dociley behind in her clogs. Kazuko’s wearing a traditional kimono and Tokiko’s in a spiffy, snug-fitting, western-style suit.

They stop to talk by a church. Tokiko pulls her gun–and then suddenly she laughs and we get an intertitle saying, “Gee, I see now why Joji likes you,” or something along those lines. Ozu cuts to another shot of the women’s feet, as Tokiko runs up to Kazuko. 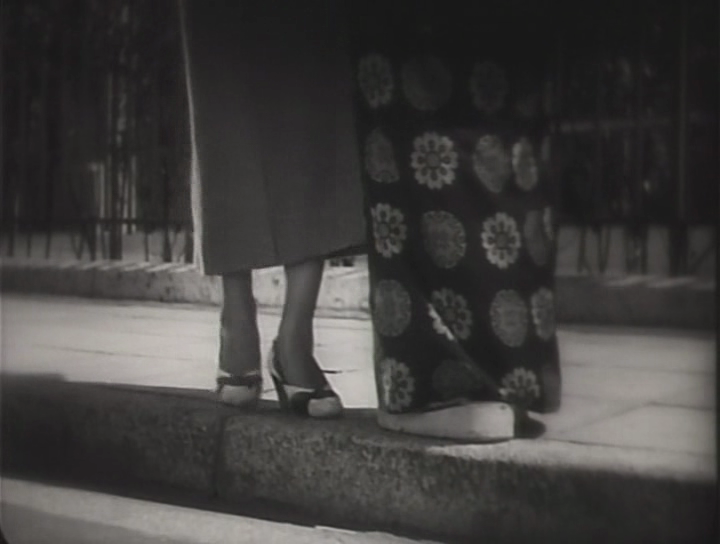 Huh? We in the audience think. Then we get this shot. 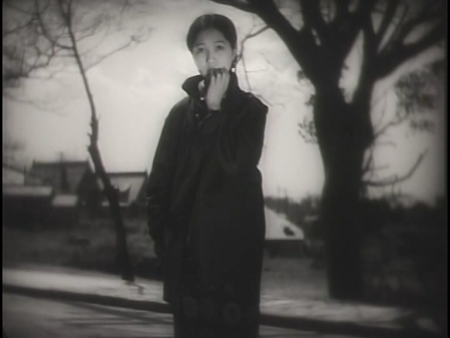 It’s the most suggestive ellipsis I’ve ever seen, as good as turning a big spotlight on the unseen kiss, especially given the way Kazuko touches her lips, a lingering, surprised, almost sensual gesture.

That’s it for their relationship. The big romance between Tokiko and Kazuko is over almost as soon as it begins. They don’t  share the frame again. But what a kiss! Its mystery is its charm. A picture may be worth a thousand words, but here the lack of a definitive image gives birth to countless kisses, whose eroticism and intensity is limited only by the imagination.