The Plot: Orphaned outcast Jean Grant is so desperate to get out of her hick town and discover her “true nature” she elopes with sensitive Tim, the unhappy son of the lecherous druggist (who is also Jean’s employer). After gritting her teeth through their wedding night, Jean steals Tim’s $1000 nest egg and hightails it to New York. There she checks into a cheap hotel and sets out to explore the city, alternately racked by guilt and overflowing with delirious joy at her newfound freedom.

Stumbling into an Italian restaurant in the village, she meets sleek Sherri, a fashion designer sporting both a pants suit and those telltale square cut nails. Sherri buys her dinner and hires Jean as her assistant after Jean sketches some clothing ideas on a paper napkin. Sherri’s previous assistant has gotten married and “didn’t fit in” anyway. Sure, Jean’s only job has been as a soda jerk for the lecherous druggist, but Sherri senses that she’ll “fit in.”

Jean proves Sherri correct the next day when Sherri suggests they celebrate her new job: “let’s drink lunch.” The wordly designer, wearing her trademark silk pantsuit and “large, strange earrings,” whisks Jean off to one of those fantasy lesbian restaurants that only exist in books. “All the waiters were fags,” and the female clientele wasn’t “waiting for a man.” Sherri and Jean hold hands across the table, but at dinner that night Sherri has pangs of conscience: “You don’t know what you’re getting into, and I’m not going to teach you.” That’s on page 57. By page 59, they’re in Jean’s hotel room and their clothes have “melted away.” After a few pages of ecstasy, Sherri warns Jean again: “It’s a hell of a life.” 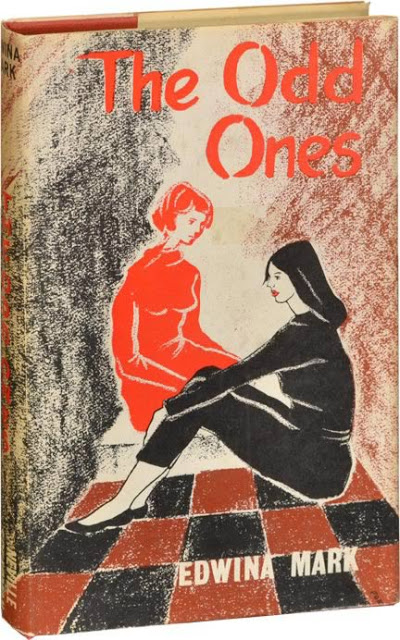 Jean explores the hellish life quite thoroughly in the next twenty-four hours. The pair visit Mrs. Crossley, a fabulously wealthy bisexual client, who feeds them brandy and sandwiches and doesn’t mind if they have sex on the drawing room couch (“Ecstasy grew within me, a long, slow golden bubble”) while she’s off arranging that evening’s exclusive lesbian party. Jean and Sherri stay for the party, but midway through Sherri mysteriously disappears and Jean is lured into the “Sapphic room” (hidden behind a secret door which opens at the touch of a button, like Batman’s cave) by the duplicitous Jane Manners. Jean claims to be turned off by the wealthy and powerful lesbians doing some heavy petting on the sectional couch, and resists Jane, who mauls her on the dance floor. She is rescued by the saintly butch Jimmy, a lonely but monied invert straight out of The Well of Loneliness. Jimmy completes Jean’s three day exploration of the range of lesbian experience by taking her to a seedy lesbian bar, where a rival butch hits on Jean and pulls a knife on Jimmy.

Sherri pops up to take Jean away from the seedy bar, leaving Jimmy to pay off the mobster bouncer. She refuses to explain her mysterious disappearance and she and Jean quarrel. The next morning at work Jean tells Sherri she wants to “be her wife” and Sherri promises Jean to clear up her secret “situation” (which everyone has been dropping ominous hints about) in six weeks.

The minute-by-minute narrative blessedly ceases, and a few weeks pass. Presumably, Sherri and Jean design some clothes, although mostly Jean obsesses about Sherri’s secretiveness and crosses off the days until the six-weeks are up. The day of reckoning comes, and Jean is furious when Sherri calls in sick. She wangles Sherri’s address out of personnel (Sherri has never given her address or phone number to Jean, which should have sent up some red flags) and goes to find out the big secret.

Sherri opens the door in a dress, the first shocker. Shocker number two: Sherri’s married! What a lot she and Jean have in common. Sherri’s excuse is that Bill was a soldier on leave she felt sorry for and then, after a war wound put him in a wheelchair, she felt too guilty to divorce him. She should have; as a result of their warped marriage Bill has turned completely loony and attempts suicide with a butter knife while Jean is visiting. Although Jean argues that Sherri isn’t doing Bill any favors by sticking to him, Sherri is driven by her own masochistic logic: “I cheated him. I’ve got to pay for it.” Disheartened, Jean returns to her hotel to find…her own husband waiting for her!

Turns out the nest egg Jean stole from Tim was money Tim had stolen from his bad Dad, and Tim is now a wanted man. Jean decides to return with him to their small town, help him clear his name, and pay for her part in the crime. “I’ll be back, and next time I’ll make a go of it, with Sherri or someone else,” Jean vows. The moral of the story is that lesbians have to be extra-good, to counteract their flawed nature: “I would try to ennoble myself and my way of life. It was the least and most I could do.”

Sex: Painfully ecstatic with Sherri (“the world cracked wide open for me then…I found myself twisted in a  leaping epilepsy, a convulsion of feeling that was so near pain that I cried out”), but getting hit on by all those scary butches is no fun.

Drinking: Enough to sink a ship. At their first meeting Sherri buys Jean a brandy to cure her dizziness(!) and they order stregas after dinner. For their drinking lunch, it’s double gibsons. That evening Jean is dizzy again and needs more brandy, while Sherri keeps her company with a scotch manhattan. Scotch on tap (yes, coming out of a faucet) at Mrs. Crossley’s decadent party, and that’s after Sherri has knocked back at least seven brandies by my count. Jean gulps down three double gibsons for liquid courage before confronting Sherri at home, then vomits and passes out.

Homo Psychology: All over the map. On the one hand, Jean’s flashbacks to crushes on the maid, kissing games with childhood girlfriends, and furtive research at the library are straight from your classic coming out story. On the other hand, the description of Sherri, with her narrow hips, mannish hands, and Dad who wanted a boy, is a mix of late 19th-century inversion theory (sexual preference is embodied in physical appearance) and mid 20th-century pop Freudianism (parental influence is to blame). Lines about the “ambiance of cruelty, of evil, that hung about…like a perfumed mist” hearken back to the gothic vampires of LeFanu, while saintly, suffering butch Jimmy, looks forward to Leslie Feinberg and Stone Butch Blues (albeit with more money and her own private taxi service). Mark tops off this half-baked melange of theories with the homosexual artist cliche. “What God taketh away he giveth, also; among these women there were several fine poets…more-than-good writers and painters…”

Literary Influence: This is the only first-person lesbian pulp I’ve come across, and I think the author was under the spell of J.D. Salinger, going for the slangy sensitivity that characterized Catcher in the Rye. I couldn’t help but think of former pulp author Marijane Meaker’s description of how her early literary attempts were inspired by Carson McCullers: “all my stories began to describe ‘a green and crazy summer,’ or ‘a green queer dream,’ or ‘a crazy queer green time.'”

Comment: This should have been more fun than it was. Plotwise, parts reminded me of a Pat Califia erotic fantasy, except that Jean disapproves of the sleazy lesbians instead of getting turned on at the orgy-party. If only she could have just relaxed on that sectional couch! The book’s relentlessly criticism of lesbians made me think our heroine was going to end up back in hubby’s arms, so the book’s “I’ll be back” conclusion was one saving grace. Who was Edwina Mark, and what was her lesbian experience? In-jokes about lesbian break-ups taking twenty years are interwoven with the “oh god we’re so pathetic and incomplete” cliches and the story of Jimmy getting arrested as a female impersonator when she wears a dress is remarkably similar to an incident in Lillian Faderman’s memoir Naked in the Promised Land. Was the author a sister or just a really thorough researcher? Mark’s only other pulp that I know of, My Sister, My Beloved (1955), is a more traditionally sleazy pulp, featuring a sadistic mom and her troubled daughter who has the hots for her half-sister. Full of sado-masochism, alcoholism, gigolos, murder, and drug pushers, it is altogether less interesting from a lesbian point of view.