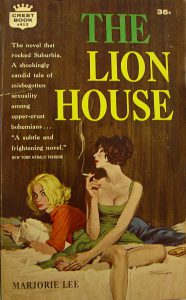 Would that were so! Here’s the shocking truth about this lesbian pulp: no lesbian sex. None. Not even some groping. It’s all come on (look at that cover!) and no delivery. I should have suspected something was amiss, when even Lucy Freeman (author of Fight Against Fears) told me in the forward that I was in for something juicy. “The reader will feel like gasping in shock as starkly written sexual scenes surge up from the pages,” claims Lucy. No such luck.

The Plot: Elizabeth “Jo” Bradford meets Frannie Browne on parents night at the progressive suburban day school where Jo works and Frannie sends her kids. Jo is drawn to Frannie (as is Jo’s womanizing, alcoholic husband, Brad) and soon Frannie and Jo are spending all their time together,  whiling away empty afternoons drinking and confiding.

Frannie is a “bohemian.” She wears jeans, short hair, and glasses, after all; she’s a bad housekeeper and the way she raises her kids scandalizes the neighborhood; she works as a freelance writer, she’s jewish and she listens to jazz. What does it matter if she’s married to a lawyer and lives in the suburbs?

Jo, who narrates the novel, is less bohemian, although she does cook “lasagna, chicken cacciatore…and various other specialties I’d picked up along my travels through Bohemia.” She and Brad have moved around a lot, due to his drinking, womanizing and tendency to lose jobs. Nonetheless, Jo has stubbornly stuck with Brad for 27 years (she’s forty-six to Frannie’s thirty), making the best of a bad bargain.

Frannie sleeps with Brad (“How’s for suburban switchies?” Brad leers) and Jo feels betrayed–by Frannie, rather than Brad. “Are you queer or something?” jeers Brad. The lesbian content doesn’t get more explicit than that, until page 146 of this 160 page book. By that time, Jo has finally left the loathsome Brad and moved in with Frannie and her husband Marc, even though they all admit it’s a little weird for the betrayed wife to move in with the other woman. Jo loves living with Frannie, but realizes Marc is less than enthused (“For Christ’s sake, go home Jo–to Brad where you belong!”), so she finds a new job, moves to the Village, and sleeps with a guy named Gordon, writing a graphic account of the affair to Frannie who’s vacationing in Bermuda.

When Frannie returns from vacation, Jo is so eager to see her that she leaps in the car and drives to Connecticut . She’s waiting in the driveway when Frannie, Marc and the kids pull up. In the den, Frannie confronts Jo with the truth of their relationship: they’re in love with each other. While Jo sputters, “What are you talking about?” Frannie explains that she only slept with Brad as a substitute, something I’d figured out back on page 44, and that Jo has written all about Gordon to pull Frannie into the affair. Jo denies this nonsense, and tells Frannie “You’ve got to get some help.” Just a few pages later, however, Jo admits to herself that Frannie is right, that they are in love with each other, and Frannie’s the braver of the two for admitting it.

Alas, this acknowledgement does not lead to a romantic reunion followed by a slow dissolve. Instead, it’s analysis for everyone! Frannie writes Jo a letter telling her that she (Frannie) is seeing an analyst five times a week, and advises Jo to do the same. Later Jo runs into some mutual friends who tell her that Frannie is growing her hair long and making cookies–analysis works! Jo realizes it’s her turn now, to recommit to happy housewifery. So she meets with Brad, who been hanging around the whole time. The implication is that they’re going to get back together.

This was where I “gasped in shock” just as Lucy Freeman promised. I could live with Jo renouncing lesbianism, but returning to slimey Brad? Ugh, ugh, ugh!

Sex: Jo masturbates after she finds out about Frannie and Brad (affair part 1). She eavesdrops on Frannie and Marc having sex while she’s living with them. She reads an account of Frannie has written about having sex with Brad in a car (affair part 2) and is relieved to discover that Brad prematurely ejaculates before penetration (a real winner that Brad). Brad tries to persuade Jo to have sex with him, saying “we’ll do it your way”–guesses on what that means, anyone?  Jo has lots of sex with Gordon, but he turns out to be another sicko in need of analysis–he gets turned on by being a peeping tom, spying on Jo from her fire escape.

Homo Psychology: Frannie has been abandoned by her father and has a beautiful, domineering mother. Jo’s maternal instinct has been frustrated because Brad would never agree to have kids. The title is a reference to a recurring dream Frannie has about a lion. Big revelation when Frannie realizes her dream lion doesn’t have a mane and must be female.

Drinking: “She pulled a bottle out of the cabinet and I got the ice and soda.” They don’t even need words, do they? Massive drinking before, during and after dinner parties; driving into the city for “liquid lunches at 21,” followed by more drinks at a jazz club. Alcoholic Brad pours a quart of gin into the pitcher of OJ at breakfast and then moves on to “twelve-ounce martinis.” Cue cirrhosis of the liver–maybe Jo can still get rid of him.

Barbara’s take: In her “Lesbiana” column in The Ladder, Grier wrote this: “Major Lesbian novel for 1959. Jo, 46, the narrator, tells of the abortive but beautiful love affair between herself and Frannie, aged 30. Both are married women caught in conventional suburbia; both are repressed Lesbians until they meet and the fireworks begin. Beautiful writing and excellent psychological analysis enhance this first novel.” 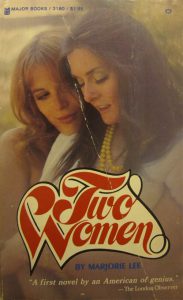 My take: Sure, this is better written than the average pulp. There are shades of Salinger in the book, not just in Frannie’s name and use of italics, but in the whole bored-wives-in-the-‘burbs ambiance (see Salinger’s “Uncle Wiggily in Connecticut” from 1948). But beautiful love affair? Fireworks? Grier was either reading a different edition than the one I had, or else she’s capable of reading all sorts of lesbian subtext into the narrative that I am too literal-minded or too distant from those desperate times, when any crumb of Content was pounced on, to spot. Or was it just the way the hets seem more messed up than the homos that made the novel praiseworthy? Stranger still, the book was reprinted in 1978–well into the era of gay liberation–with a new title, Two Women, and a new misleading cover. How many lesbians thought this was another fun read in the just-born genre of lesbian romances and got nothing but 50s-style angst for their two bucks?