From 1942 to 1944, Barbara Deming worked for the Library of Congress as a film analyst.  Her job was to go to the movies and take detailed notes about what she watched. By her own account, she saw a quarter of all the Hollywood films released those three years.

In her youth, Deming dated Lotte Lenya and had a long-term relationship with Mary Meigs, If you’re thinking she was part of the triangle that Meigs wrote about in Medusa Head, no, she was in the earlier triangle, the one that ended with Deming and Meigs splitting up and Meigs going off with Marie-Claire Blais to have the second triangle, the one where each point in the triangle wrote a book containing her version of events after it fell apart. Got that? 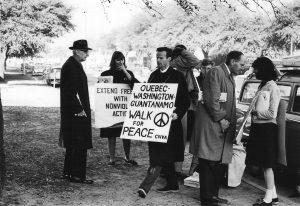 Later Deming became an out lesbian-feminist peace activist. Martin Duberman wrote about her in A Cause for Living, and there’s a fund in her name that gives small grants to feminist women in the arts.

But what I envy Deming is not the glamorous girlfriends, the literary circles she traveled in, or her admirable activism. It’s that job–getting paid to go to the movies! And by the Library of Congress, no less. A high point for the US government, in my book.

She was part of the LOC’s early attempt to establish a film library. In the days when film viewing was a chancier and more ephemeral experience (few revival houses, DVDs far in the future), and while they were waiting for congress to give them money to buy actual prints, these “film analysts” were some crazy effort to collect, at least in anecdotal form, some of America’s film output. The LOC finally gave up the film library idea in 1945 after spending three years trying to get funding from Congress (a low point for the US government). Am I correct in thinking the idea wasn’t revived until the National Film Registry of 1988?

Deming wrote about her filmgoing experiences in a book of essays called Running Away From Myself: A dream portrait of America drawn from the films of the forties (the original title was A Long Way From Home: Some film nightmares of the forties). She wrote it in 1950, but the book wasn’t published until 1969, when she revisited the post-WWII era in the midst of her anti-war activism.

She writes in the first chapter that  movies reveal the dreams and nightmares of their times. “In unison they yield up their secrets. If one stares long enough at film after film, the distracting individual aspects of each film begin to fade and certain obsessive patterns that underlie them all take on definition.”

I’ve always loved that idea, and wanted to replicate Deming’s experience. What would today’s obsessive patterns be? Alas, no one is paying me to go to the movies, and I fear that these days the ringing of cellphones and glowing lights of “viewers” texting would prove a fatal distraction from those elusive obsessive patterns. 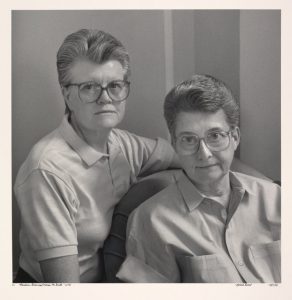 However there is another mass of work waiting to be explored: the library’s Barbara Grier and Donna McBride pulp collection. At 1,393 items it’s a Mount Everest of pulp, right at my doorstep, waiting to be climbed. For a long time I’ve wandered in its foothills, but Deming’s example gives me a plan of attack.

If I do like Barbara and stick to three years worth of books, I’m down to a more manageable 206. And some of those are pseudo-science nonfiction (The Call Girl: A Social and Psychoanalytic Study) or literary works, like Durrell’s Justine, which I can skip if I want to (hmmm–will I want to?). I’m going to start with 1959 (the year Lois Lenz was set) and go through 1961.

And after all, what kind of a blog would this be without some numerically-based project or goal?

I love the fact that reading these books, which I have to do on-site, makes the reading experience the equivalent of Deming’s movie-going. Scratching notes (in pencil–no pens allowed) about something that will be taken away from me when the library closes. I wonder if Deming had to go to movies twice sometimes?