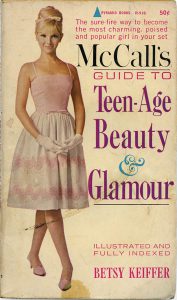 Once you learn what it is about yourself that needs improving, there's no longer any reason to feel helpless or hopeless.

I watched The Bachelor a few days ago, probably for the last time. It turns out my enjoyment of the premiere episode had more to do with being on vacation and seeing old friends than the show’s intrinsic qualities; and like the pleasure of watching HGTV every night in the hotel room, is not to be recaptured now that I’m back in my normal surroundings. On Monday night after the host advised the assembled women to make the most of whatever fleeting moments of contact they had with the bachelor, I found myself asking, “How could you ever hope to have even a semi-normal interaction in these circumstances?” — a question which I realize is very much beside the point.

Pondering the show, I was struck by how closely the ladies resemble girls like Sue in The Popular Crowd (Anne Emery, 1961) Sue is determined to date a boy she’s only seen from a distance, football star Pete Carroll. “I’ve got as good a chance as anyone,” she thinks. Except for the whole sex thing — what these books refer to as “heavy petting” if they refer to it at all — the bachelor contestants are the soul sisters of all those teen heroines desperate for a date to the prom (A Date for Marcy, Senior Prom). To aid them in their quest, I rounded up some period advice on man-catching.

Pursuing a man: Emily Post (1945 edition) asks, “How far may a girl run after a man? Catlike she may do a little stalking! But ‘run’? Not a step.” This advice is universally echoed until Accent on April (Betty Cavanna, 1960) in which Kathy is perturbed because her best friend Brenda has given her (Kathy’s) obnoxious brother Jon an expensive wallet. She complains to her mother that Jon can’t even return the wallet because it has his initials on it. Kathy’s mother says,”Maybe he doesn’t want to take it back.” To which Kathy responds, “Then there’s something wrong with all the books on teen-age etiquette. He should want to!” Her mother replies: “Boys are unpredictable. Some of them actually like to be chased.” Exhibit A: the Bachelor.

Grooming: In The Unchosen (Nan Gilbert, 1963) a group of wallflowers transform themselves with the help of magazine advice columns. “She’d given up spike heels with sportswear and exchanged her near-purple lipstick for a new pink-pearl. Her hair shown with brushing. Her hems and seams didn’t so often show the silver glint of safety-pin repair.”

That girl was clearly following the advice of McCall’s Guide to Teen-Age Beauty & Glamour (Betsy Keiffer, 1959) which outlines a long list of don’ts, including smeary lipstick, charm bracelets that clank and grubby handkerchiefs. The book then sums up the ideal girl’s appearance with a somewhat vague description: “she is neat, she is sweet, she is clean, and perhaps most important she is understated.”

I must say I prefer the fashion advice in My Sister Mike (Amelia Elizabeth Walden, 1956) another tomboy-to-temptress transformational tale. “She learned the feel of a cashmere sweater, the smell of good leather, the simple elegance of a dress that was all line…she caught the knack of individualizing herself…Plain colors, stark simplicity, a bright splash of color in a Chinese gold or chartreuse scarf, these were part of the casual sophistication she strove to attain.”

I’ll leave it to regular viewers to judge where the contestants stand on the spectrum running from spike heels with sportswear to casual sophistication.

Dating: McCall’s Guide to Teen-Age Beauty and Glamour advises you to accept an invitation promptly and enthusiastically, which advice the bachelor contestants all follow to the letter. No way they’re going to be the McCall boy’s “pet peeves: the girl who tries to stall” or “the girl who won’t accept a date until she knows what the date is for, making it clear that the pleasure of having the boy’s company is not her primary interest.” Other verboten behavior on the McCall list includes correcting your date, eating the most expensive dish on the menu, and “the girl who keeps a stranglehold on her date all evening.” Watch it ladies! At least those huge group dates have the What To Do on a Date (Coronet, 1950 ) seal of approval. The narrator raptures: “A group…doing things together — pretty good idea for a first date!”

Other Girls: McCall’s says: “Girls are even more important in your life right now than boys are.” If only the Bachelor’s harem would heed that advice! But I fear that the tiny bit of lesbian titillation in the premiere is not to be repeated. Jealousy is the theme, as it was back in Double Date (Rosamond du Jardin, 1951). In that book Mike can’t decide between twin sisters Pam and Penny. First Mike dates Pam, then he dates Penny, then he dates Pam again, then he dates Penny. “Of all the double-crosses!” shouts Pam at Penny after the final switch. Penny to Pam: “It’s not as if you owned Mike or any other boy. I guess he has the right to like me best if he wants to.” Remember that ladies, as well as this from the “Popularity Plus” chapter of Hi There, High School! (Gay Head, 1960):  “Don’t wear your feelings on the outside. If they stick out like a porcupine’s needles, they’re going to bump into plenty of trouble.” And you’ll be crying in the bathroom knowing there’s a camera waiting on the other side of the door and a mike picking up your every sob.

Sex: “A kiss is not the price of a date,” McCall reminds us all, before handing out advice on how to adroitly dodge said kiss without hurting the boy’s feelings. How To Say No (Coronet, 1951) covers drinking (the Bachelor ladies could use some help there), smoking and finally the unmentionable: “Just give him half a chance alone and there’s no stopping him,” complains one girl. The solution is to distract him, in one example by peppering him with questions about the track meet. “You girls seem to think it’s always the boy who starts things,” complains one fellow. One girl admits the truth of that: “if you really like a boy, you want to be close, hold hands with him and give him a goodnight kiss.” And so the dilemma begins. How far is too far? (as the song goes).

In Make A Wish for Me (Lenora Mattingly Weber, 1956) Mary Fred tells her sister Beany, “unless it’s the real thing and you can start plans for getting married, all this amour-amour seems a little on the cheap side.” After discussing the ersatz popularity of the Hot Lips (slang for the local campus hussies) Mary Fred lowers her voice to add “Let’s face it, hon, it’s the heavy loving scenes that lead up to–well, last year one of the Hot Lips had to get married in a hurry.” Pregnancy, the medical condition that dare not speak its name. Ladies of The Bachelor, check your birth control supplies.

Sue in The Popular Crowd probably has more in common with the Bachelor contestants than Mary Fred. When her boyfriend Pete asks another girl to a dance, she decides to “make him do what she wanted–and now she knew how.” The “how” turns out to be this: “He grabbed her and kissed her with grasping violence. His hands fumbled inside her coat, reaching for her in ways he had never tried before.” Sue ends up breaking up with Pete, mostly because he’s a big jerk, even putting his inept attempt at amour-amour aside.

I have a feeling these television gals are going to ignore the lessons Sue learned the hard way in favor of single-girl guru Helen Gurley Brown. “Quite a few ‘nice’ single girls have affairs and do not suffer at all!” she says in Sex and the Single Girl–rather daringly for 1962. Gurley Brown’s remark seems quite sweet beside The Sex Life of the Career Girl (Roy Lee Sherman, MD and Lillian Preston, 1965) whose authors leave the question of sex to the individual girl, asking pragmatically, “Does the projected affair promise real help to her in her career?”