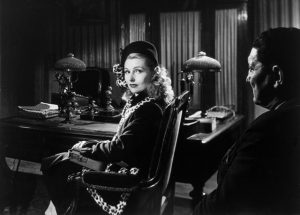 Lesbians pop up when you least expect it. Back in the old days, we used to call this “content,” (shorthand for lesbian content) as in “that book/movie/tv show has some content.” Last night I tripped, quite unexpectedly, across some content.

I was at the movies, a 1947 french film called Quai des Orfevres. And there she was–an attractive blonde in pants and thick-soled shoes all mixed up in a murder for love of her upstairs neighbor, the aptly named Jenny Lamour.

Suzy Delair plays Jenny, who has a musical act with her jealous husband Maurice. Dora, the lesbian (Simone Renant), is friends with both, but it’s Jenny she’s crazy about. The story involves a murder that none of the three committed but all of them are implicated in, mostly because they were all at the crime scene at different times. It’s a silly plot, just an excuse for the great characters to interact.

I loved the way the lesbian had her name–Dora–appliqué’d on her sweater, and that she was a working girl, running a little photography studio (her client, a creepy, wealthy pornographer, is the murder victim). She comes across as reserved, a little world-weary, but loyal, and she gets some great scenes. After Jenny comes to her for help, she goes to the victim’s house to retrieve a tell-tale piece of evidence Jenny has left behind, and gives her ex-client’s body a disdainful kick while she’s at it. Then she returns to the studio and gives Jenny the evidence. “Why are you so good to me?” sobs Jenny. “Because I…I–” Dora stops just short of confessing her passion for Jenny, instead passing it off as friendship for both her and her nebbishy husband Maurice.

And then there’s the climactic scene (climactic in a lesbian rereading anyway) when the detective (played by the fabulous Louis Jouvet) tells Dora he identifies with her, that they’re two of a kind. For a breathless moment, I wondered, was director Henri-Georges Clouzot so advanced as to cast Jouvet as a sympathetic closeted gay cop? No, not quite. The detective identifies with the lesbian because they’re both unlucky with the ladies.

My filmgoing companion dismissed Dora as a “pining lesbian.” Well, sure–that’s what lesbians did in books and movies of that era. They pined, endlessly and hopelessly. And that’s if they were lucky.

But for 1947, Dora got pretty sympathetic treatment, paricularly when you compare Quai des Orfevres to Hollywood’s Young Man with a Horn which came out three years later, and has Lauren Bacall playing jazz musician Kirk Douglas’s warped first wife, Amy. After destroying him psychologically, Amy abandons Kirk to go to Europe with a lady friend. “You’re a strange girl, Amy,” says Kirk, muscle working in his cheek.

Kirk finds comfort in the arms of Doris Day. I like to think that Amy met up with Dora in some left bank bar and shared a few drinks–and perhaps a little comfort as well.