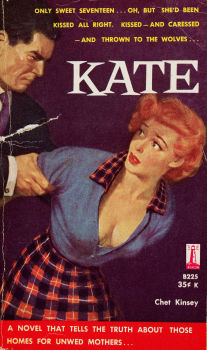 Add this book to the category, “I’ve slogged through it so you don’t have to.” This is a perfect example of the mediocre stuff that was churned out solely to keep those drugstore bookracks filled. Did even Barbara Grier read this? I doubt it. Some friend said, “Barbara loves any paperback that has even a page of lesbian content, let’s give her this for Christmas!” The friend hadn’t read it either naturally–she’d just flipped through until she found the lesbian seduction/rape on page 148. Then she stuck a bookmark there, wrapped the book in red striped paper and gave it to Barbara. Barbara glanced at page 148, had a good laugh, and then shelved it, after making a check mark in the appropriate column of her lesbian lit stats spreadsheet. I suspect I am the only person in the world today who has actually read this book from beginning to end.

The Plot: Kate, a buxom Newark high school student is seduced by Ray Ungas, a sleazy truck driver, trading sex for the finery her mean old parents deny her. Ray bribes Kate over to his apartment with a black nylon negligee, and she’s trying it on when Ray’s childhood pal made good, Danny Dornan stops by. Kate is starstruck: Danny Dornan, it just so happens, is a famous crooner and Kate’s idol (she’s president of the local chapter of his fan club). Ray says he’s going out for beer, and since Danny is drunk and Kate’s wearing a transparent nightgown, the inevitable happens. Ray returns conveniently armed with a camera, and takes a picture of the pair in a compromising position.

Since Kate’s naivete is in proportion to her bust size, she buys Ray’s story that the photo is a “souvenir” for Danny, and that Danny is sending her $50 by way of Ray because he “likes” her. She further agrees to run away with Ray, not because she “likes” him (she’s decided to save herself for Danny) but because she’s had it with her abusive religious parents who like to beat her in the nude (her, not them).

Kate believes Ray’s taking her to a love nest in Westchester, but instead he dumps her at the Hill Cabins Motel, run by the sinister Mrs. Wembley. The other occupants are all attractive young women, some in an advanced stage of pregnancy. After chatting with Gloria, a pregnant young model, dim bulb Kate eventually puts two and two together. Hill Cabins is a baby farm–the girls are either getting abortions or selling their unwanted infants at $1500 a pop.

Gloria turns suspicious when she discovers Kate is without child, thinking that Kate must be in cahoots with Ray, who is blackmailing Mrs. Wembley and threatening all of them with exposure. However, a day in Kate’s company reveals the depths of the younger girl’s obtuseness, and she ends up taking Kate under her wing. In the midst of all the blackmail-baby farm intrigue, we get a mini-makeover, with Gloria drilling Kate in posture, diet and exercise. Kate also gains a new appreciation of flowers from Joe, the enigmatic handyman.

Kate needs both her new friends, because she’s fending off not only Ray, who comes to visit and wants Kate to put out, but also Mrs. Wembley. Mrs. Wembley is like Jekyll/Hyde; all sweetness and light and buying Kate a new wardrobe in Kisco, then suddenly calling Kate a bitch, showing off her gun and locking the girl in her room. Mrs. Wembley doesn’t understand that Kate hates Ray as much as everybody else, especially since Gloria clued her in to the fact that Ray is using Kate to blackmail Danny.

Coached by Gloria, Kate manages to worm some info about Danny Dornan out of Ray, and sets up a meeting with the crooner to tell him he’s got nothing to fear from her. To her dismay and disillusionment, Danny slaps her around and calls her names, even when she tries to reassure him that she’ll never tell anyone she was underage when they slept together. She returns to Mrs. Wembley’s in tears–Gloria’s delivered her baby and departed–and tells Mrs. Wembley she’ll help her frighten away the blackmailing Ray. “I could kiss you” exclaims Mrs. Wembley. “Don’t,” snaps Kate, who finds herself repelled by Mrs. W. for “some unfathomable reason.”

Their plan is that Kate will meet Ray in the woods, and threaten him with Mrs. Wembley’s gun. Alas, Ray doesn’t take Kate seriously–this is the girl he could twist around his little finger with a pair of cheap stockings, after all. They argue, he makes a grab for the gun, the gun goes off and Mrs. Wembley suddenly appears to pronounce Ray dead.

Mrs. Wembley whisks the stunned Kate back to the motel and we get a familiar scene–the predatory older lesbian seduces the younger girl under the guise of taking care of her; giving her a hot bath, food, and a sedative. I’m not sure if seduces is the right word; it’s more like Mrs. Wembley sneaks sex out of Kate while she’s groggy in bed. Kate feels revulsion, but “she also felt something else….She lay back in bed with a sigh and accepted the caressing hands, the seeking mouth.” That insatiable sex drive that possesses all pulp women triumphs again. In just a few lines Kate is begging “Please!” while Mrs. Wembley chuckles triumphantly. Next comes the “wild, blind delight” and “intense, ecstatic fulfillment” which leaves them both “gasping with pleasure.” It’s the best sex of the book, except that for Kate it’s “qualified by disgust and hatred.”

Sex with the motel manager does clear Kate’s mind; suddenly she realizes Mrs. Wembley killed Ray, and tried to make Kate think she was the murderer. She confronts her erstwhile lover, and some nude wrestling follows. Mrs. Wembley falls and hits her head and Kate is getting ready to make a break for it, when Joe the handyman enters and offers some advice: she should call the police and tell them the whole ugly story, just like he did in 1909 when he messed up an abortion. Kate makes the call, choosing the righteous path, perhaps envisioning a future caring for those pretty flowers she’s gotten fond of.

Sex: In this book, much like in Twisted Loves, desire is a force that takes over women whether they want sex or not. Of Ray’s initial seduction: “At first she had been timid, then some strange, inexplicable emotion had erupted like fireworks throughout her body.” Sex with Danny: “What a dreamy madness there had been in her struggling on the bed.” This inexplicable force takes over Kate several times, and it doesn’t seem to matter whether she’s a willing partner or not. Ray rapes her on the trip to Hill Cabins but after the initial struggle Kate enjoys it (can I hear an “ugh”?). From Gloria Kate learns  to avoid sex by subterfuge (faking your period or a case of poison ivy) because there’s no calling halt once you’ve gotten started.

Drinking: Gloria gives Kate shot of brandy; the snooty girl getting an abortion shakes up cocktails (but doesn’t share); Gloria and Kate drink more brandy, toasting “success to all women in the messy game with men.”

Homo Psychology: The hints start at page 60 but Kate stays clueless for the next 80 pages. Why is Gloria so sure Mrs. Wembley has never been married when she wears a wedding ring? Why does Mrs. Wembley forbid the presence of men on her property “except as I have need of a plumber”? Why does Mrs. Wembley say “man” like it’s a curse word? Why does Gloria warn Kate not to go nude around Mrs. Wembley? Finally Mrs. Wembley explains her philosophy: “Because they took risks with men–that’s why the girls have to come here. They needed sex and forgot the risk, darling. No matter how young or old we are, we all need the stimulation of sex. Sex is life, in a sense, something beautiful. There are better ways than men, my dear.” 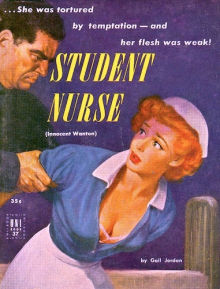 Even the cover is reused.

Comment: This book has probably never before been considered for its unique, individual qualities; it exists as part of a mass, what Louis Menand in a recent New Yorker calls the “apparently inexhaustible profusion of books with racy titles and lurid covers.” Let us pause a moment to marvel at the fact that I fished it out of the stream and actually read it.