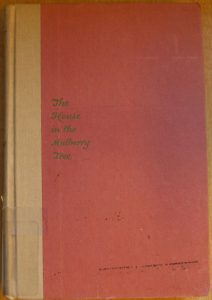 The House in the Mulberry Tree, by Zena Garrett, 1959, Random House

Book Jacket Copy: “Then Elizabeth’s burgeoning, formless emotions, blown hither and yon by the strife around her, crystallized into a youthful and innocent passion for Nonie, nourished by Nonie’s kindness and Elizabeth’s idealization of the relationship that Carter and Nonie seemed to enjoy.”

A dull southern gothic, penned by first-time author and Carson McCullers-wannabe, Zena Garret. The “About the author” blurb gives the reader fair warning: “Her writing career was postponed, however, because of the happy discovery that she had talent as a sculptress.”

The Plot: Eleven-year-old Elizabeth is bored and unhappy on the family farm near Abbotsville, your standard small-town hotbed of repressed passion.  When newly-wed Nonie Cameron moves in next-door, the precocious pre-teen promptly develops a big ol’ crush on her quirky neighbor. Nonie encourages Elizabeth in an absent-minded way–her adoration distracts Nonie from wondering whether her husband, Carter, is actually still in love with his crazy first wife, Holly.

Down the road, there’s another June bride fresh from the city; Gay, short for Gayther has married Joe Abbot to escape a life of white-collar drudgery. But before you can say, “I married a creepy control freak hung up on his dead mother,”  Gay is eyeing Elizabeth’s older brother, Rand.

Endless interior monologues from multiple points of view makes the novel feel like one long chorus of discontent. No one is happy with their lot in life in this book. This mental whining and complaining takes up the bulk of the book’s 249 pages and the rest is filled in with alligator eggs, snakes, stud horses, overripe mulberries and other heavy-handed sexual symbolism. Freud is responsible for a lot of bad mid-century writing, that’s for sure.

Finally, the author winds up the frayed plot threads. Rand rejects the depressed Gay, who lies down in her hammock and slits her own throat with a pair of pruning shears (introduced early on, like a gun in the first act, when her control-freak husband won’t even let her prune the roses). Carter can’t forget first wife Holly and he and Nonie split up. Nonie is making Elizabeth a dress and during a fitting session, pinches the young girl’s nipple, just as Elizabeth’s mother walks in. Mom forbids Elizabeth to see Nonie, and Elizabeth runs away and is found in a storm. The book ends with Elizabeth looking forward to starting school, after the dreary summer.

Sex: Some off-the-page heterosexual encounters and lots of inchoate yearning. Elizabeth wraps her legs around the mulberry tree trunk and squeezes. “Something was happening inside her that was going to make her explode if she didn’t do something about it.” Elizabeth also fantasizes about an ideal future with some faceless man. “Who was sitting in the chair? Was it Mrs. Cameron or the faceless man?” This conflation of  female crush and dream lover is the closest thing to lesbian content the book has. Turns out the nipple-pinching has a perfectly rational explanation: Elizabeth was describing how she’d been molested by a Mexican farm hand, and Nonie says, “Is this what he did?” and illustrates absentmindedly–she’s actually brooding over Holly and only half-listening to poor Elizabeth.

Drinking: The Camerons like their cocktails. Poor, depressed Gayther gets drunk on whiskey at one point.

Homo Psychology: Mean, controlling moms are to blame for any deviant tendencies. Per this book, half the inhabitants of the Gulf of Mexico are headed for the twilight world.

The most exciting part of reading this book.

Barbara’s Take: “Although psychiatric opinion insists that the emotions of pre-teenage children do not constitute variance, students of variant literature will enjoy this novel. Lonely, unwanted and unloved, 11-year-old Elizabeth Henderson’s love and devotion for a married woman who lives next door is told with great compassion and understanding. Her cruel mother sees some innocent caresses between the two and forbids the girl to see her friend again. The ending gives some hope for the child’s future.” (The Ladder, March, 1960)

Comment: I can see that Grier would get excited in 1960 about a book featuring a pre-teen who’s so clearly a baby butch, but “enjoy” is too strong a word for the experience of reading this novel. It’s fairly well-written, which somehow makes it much more tedious than a trashy pulp. Give me predatory lesbians over yearning pre-teens any day of the week. I slogged through 249 pages of this swampy novel for maybe one page of faintly deviant content. And now you don’t have to. Ever. You’re welcome.