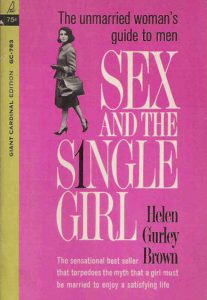 The recent death of Helen Gurley Brown has had me dusting off my copy of Sex and the Single Girl for yet another pleasurable reread. It’s always a happy experience to leaf through my disintegrating paperback, contemplating the advice to drink my “serenity cocktail” on one page (among the many other things HGB anticipated was the jamba juice craze) and wear man-pleasing “slinky black” the next. As good friend and fellow-writer Lynn Peril puts it, “She was so right — and she was so wrong!”

Anyone in the know now knows that Madmen’s Peggy bears more than a passing resemblance to HGB, who worked as a secretary for Don Belding, partner in the advertising agency Foote, Cone, & Belding, eventually being promoted to copywriting, and quickly rising to become one of the highest-paid women in her field. (is magazine editing in Peggy’s future?)

The recent HGB biography (Bad Girl’s Go Everywhere, by Jennifer Scanlon) and most current articles also identify Candace Bushnell and Sex and the City (the book, the TV series, the movies, the phenomenon) as HGB’s heir to the business of glamorizing the single girl, while paying lip service to the traditional goal of matrimony.

Yet fewer fans probably know of HGB’s predecessor, the one and only Marjorie Hillis, who published Live Alone and Like It in 1936. While less of a cheerleader for the single girl’s sex life, Hillis, like HGB hinted more than once in her single-girl self-help manual that marriage wasn’t all it was cracked up to be. Her follow up to the best-selling “guide for the extra woman,” was the more topical (it was the Depression after all) Orchids on Your Budget, which includes the chapter “Can You Afford a Husband?” Hillis admits, “It may be an extravagance, but even periods of strict economy should include some extravagances if possible.” How much was she kidding?

Twenty-six years later, HGB opened Sex and the Single Girl this way: “I think marriage is insurance for the worst years of your life. During your best years you don’t need a husband.” Two hundred and forty-six pages of mixed messages later (you need a man! you don’t need a man!) HGB ends with the empowering idea that “Those who glom on to men so that they can collapse with relief…are the ones to be pitied.”

I must admit that the pre-women’s lib era feminist tidbits, pleasurable as they are, pale besides the true appeal of single girl self-help — the apartment and clothing makeovers. To hell with high-minded sentiments about singlehood, I want that “corner of Versailles” that will make people say, “That girl has the most divine apartment!” I never get tired of reading how HGB’s friends “Mark and Schuyler” (do we doubt for a second they were gay?) made over her pad with “two enormous white rococo lamps,” a “low travertine marble table” and (my favorite) “several satin pillows.” Sure, when I really think about an apartment that’s “moss green, hot pink, and white,”it sounds uncannily like my twelve-year-old best friend’s bedroom, but still.

Just as appealing is the apartment that belongs to one of Marjorie Hillis’s “cases” (Hillis peppers her advice with anecdotes about good and bad single ladies, who illustrate her advice in a kind of Goofus and Gallant point-counterpoint). Case XV is Miss W., who transformed her one-room apartment by “constructing…bookshelves and cupboards made of light colored modernistic-lookng wood. The doors of these conceal a radio, a bar, and a wide variety of shelves and equipment, all as compact as a Pullman.” She adds some “charming white pottery,” “Basque linen from Macy’s,” and “red glass from the ten-cent store” and we get an apartment “as gay and chic as a millionaire’s villa on the Riviera.”

HGB and Hillis also share a belief in repaying hospitality with big cocktail parties where you disguise your cheap liquor by mixing up horrendous concoctions like Helen’s “chloroform cocktails” or Marjorie’s “glüg, a delicious Swedish drink.” They like inviting people to tea (Hillis) or brunch (HGB), both cheaper than dinner.

Their fashion advice follows the same well-worn path. Single girls can’t afford not to follow fashion; build your wardrobe around one (Hillis) or two (HGB) colors; buy well-made coats and economize on the clothes you wear less frequently. Both of them tout the little black dress which can be varied by altering the hem length and tying different scarves around your neck.

In fact, that’s a pretty good metaphor for this type of book. As HGB reveals in her chapter on makeup and how to apply, “Mademoiselle, Glamour and Seventeen go over the same instructions again and again, slightly regilded to make them current.”

It’s been fifteen years since Sex and the City. Someone, somewhere is regilding the single girl how-to, writing about today’s extra woman/career girl/bachelorette/spinster, and how she’s perfectly happy living alone (although if she wants to get married, that’s okay too) in her hip apartment (I’m seeing a mixture of DIY and mid-century modern), wearing her quirky, individualized, yet fashion-forward wardrobe (handsewn from scavenged items), and serving home-brewed beer and wine as she celebrates the single life with a fabulous (and cheap) cocktail party. Can’t wait to read it!