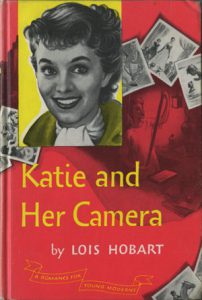 The Story: Dad has died and Katie has to get a job in order to finish college (a weak or absent patriarch is always a good excuse for a career). Inexperienced Katie applies for a part-time job as assistant to photographer Rolfe Esperson, who not only hires her but proceeds to teach her everything he knows, loans her his equipment, and pays her to boot. At one point he says she looks worn out and gives her a hundred dollars with instructions to go on a shopping spree.

My kind of boss!

Katie takes to photography like a duck to water and by mid-book has set up a darkroom in her basement and sold a bunch of photos to Life Magazine. After graduation she gets a job on a small-town newspaper because, despite having only a minor in journalism and no newspaper experience, she has her camera and that Life credit under her belt. Again, she becomes experienced in an incredibly short time, impressing her new editor and his daughter: “Dad says it usually takes months for a cub reporter to take hold and really become useful, and you were learning the ropes in a matter of weeks.” The moral of this book seems to be that if you’re smart and work hard you can do anything.

Romantic Interest: Paul Serrill, introduced to her by her perfect boss, natch. He’s an established journalist who Katie believes is out of her league, and he spends most of the book dishing out good career advice before suddenly realizing he’s in love with her. This changes little, their dates continue to be career counseling sessions: “Remember, you don’t make a living in photography by concentrating on major markets!” All goes swimmingly until he sends sophisticated Diana Caldwell to pick up Katie from the train station. Katie is instantly suspicious and jealous: why hasn’t he mentioned Diana? Has he been seeing her all along? Always insecure about her naivete, she’s convinced Paul has thrown her over for glamor-girl Diana.

Oh, Katie, of course not. Diana’s just been helping Paul and Rolfe on an investigative story about drug rings, which Katie discovers when she finds Rolfe unconscious in his studio, with all his negatives tossed about. However, she still feels too mad and hurt by Paul’s insensitivity to apologize, and she and Paul break up. No worries; a chapter’s worth of time to think and Katie is ready to make up. Paul produces his mother’s opal ring, the end. They will clearly be one of those complementary working couples who read and critique each other’s work. Once they’ve paid their small town dues, they will head for Chicago, or New York, “since it’s a publishing center” and move from success to success.

Income: Katie is paid $25 a week for five afternoons, 1pm-5:30. That is equivalent to $205, or about $9/hour, in today’s dollars. When Mom asks how much she’ll get for the Life photos, Katie replies: “Goodness, I don’t even know. But a good price I would think, one hundred dollars or one hundred and fifty dollars a page, and this is always a two-page feature.” So a total of $1600-$2400 in today’s terms.

Career Crisis: Katie only has the romantic crisis, she has been the recipient of too much good advice to make a mistake in her career. At one point she notices some smudges on a print and chides herself for not dusting the negative.

Career Advice: That’s what this book is all about—the plot is secondary. Rolfe is writing a book about photography and large chunks of it make their way into the story. Learn different cameras. Keep your negatives organized and tidy. Don’t make duplicate submissions. My favorite: remember the secondary markets, i.e. recaption, regroup, and resell your photos to non-competitive publications. I was just reading the same advice (directed at writers) in the ASJA Guide to Freelance Writing, 2003.

Industrial Credibility: Lots. Cameras are named and discussed (I now know the Rolleiflex viewfinder reverses the image, although I’m still not sure what a Speed Graphic is); The pros and cons of natural light, flashes, and strobe lights are weighed; Steichen and Brodovitch (I don’t even know who the second guy is) are mentioned. One chapter describes the developing and printing process in excruciating detail.

Comment: This is one of my favorite career girl books. It’s not just boss-from-heaven Rolfe, or the wish-fulfillment of getting published in Life Magazine the very first time you submit a photo story. Hobart gets away with these delightful fantasies because she describes Katie’s ideas and work process so thoroughly, capturing the moment Katie falls in love with her new vocation—the excitement and joy of finding something you really like to do. Most books in this genre start when the heroine has finished her schooling (in home economics, or physical therapy, or architecture) and has to find a job. Those books sometimes overdo the de-glamorization of a career, and emphasize the disappointments and hardships. Katie doesn’t undergo any of the humiliations career romance authors often put their heroines through. Sure, she has her moments of insecurity and doubt, but even the one real crisis, her sudden jealousy and distrust of Paul, has its positive side. Just as well to test the relationship, she thinks, and dates a series of other fellows before deciding that yes, Paul was pretty great, and she screwed up. She writes him a letter apologizing (mostly because it will help her move forward and get on with life), and he comes running. This is one level-headed girl who has her priorities straight. 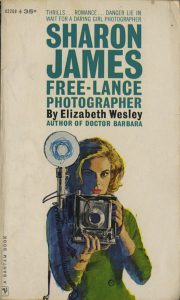 The Story: Like Katie, Sharon is working her way through college, this time because Dad had a heart attack and can’t work. Unlike Katie, she already has the dark room in the basement and a thriving freelance clientele, an exhausting schedule of scurrying around takng pictures of school pageants, birthday parties, family portraits. The career excitement in the book is that she sells herself as a fashion photographer to Nina Paxton, owner of an exclusive dress shop. However, this is dwarfed by the mystery plot, a fairly common feature in career girl books–too many authors share the widespread view of work as boring and feel they need to spice things up by dragging in drug rings and kidnappings, or at the very least a little corporate spying. While Katie’s connection to the drug ring investigation is fleeting and beside the point, the mystery in Sharon James takes over the book.

Sharon accidently photographs a kidnapper while taking pictures of kids playing in the park. Soon her dark room is trashed (just like Rolfe’s), and that’s only the beginning of Sharon’s Wonder Woman style adventures. She decides to go photograph an old farmhouse in the country and guess what, it turns out that the kidnapper is keeping his victim there! Sharon gets knocked out and tied up, manages to crawl from a burning barn, dragging with her the police officer who was supposed to be guarding her. But it doesn’t stop there, even though the kidnapper has released the kid because (due to Sharon) the cops were getting too close. Wanting to revenge himself on Sharon, the villain attempts to lure her out to another deserted farm by pretending to be a potential client who wants a photograph of his prize-winning cow. “Cows were supposed to be especially photogenic” thinks Sharon, as she gets ready for her new assignment, before realizing at the last second that it’s a trap. But the kidnapper has as much stick-to-itiveness as any career girl. He breaks into the department store during a photo shoot, knocks out M. Reynaud of the French Room, and kidnaps Sharon. In the thrilling climax Sharon is left to die of exposure in a snowy woods, but is found by bloodhounds and those slow-witted police. With all her unexpected absences and destroyed negatives, it’s a wonder she manages to graduate from college, let alone keep any clients.

Romantic Interest: Sharon James features a favorite career girl trope—the bad boyfriend who resents the heroine’s career and is replaced by the good, supportive boyfriend. As the book opens, Sharon is dating Ed who complains “Don’t you think a guy gets tired of dating a camera?” when she turns down a dinner invitation to work in her dark room. He is quickly replaced by policeman Steve Winston, who sees Sharon’s dedication to her career as similar to his own. They take a walk one snowy evening and laugh about the fact that she is thinking of the picturesque qualities of snow while he is thinking about potential traffic accidents. At the end of the book, they stand together admiring her new studio and the sign “Sharon James, Photographer.” Steve doesn’t have an opal, but he suggests, “On the window Sharon James, just so she’s the same person as Mrs. Steve Winston—a deal?” Sharon gets married but keeps her own name, at least professionally.

Income: No information given. Sharon gets the Paxton job by offering to take sample fashion pictures for free, and the next thing she knows is Paxton has used them in an advertising spread in the Sunday supplement. Presumably she gets paid at some point.

Career Crisis: Again, there really isn’t one. Nina loves her pictures, she recovers her negatives in time to fill a reprint order, and doesn’t seem that unhappy over losing Ed to rich girl Linda. Especially with Steve following her about like a faithful dog, except for the couple weeks he spends on fingerprinting course in Washington D.C.

Career Advice: Again, keep your negatives organized (a sisyphean task when thugs are continually breaking into your darkroom). Get a release from the parents of that baby so you can sell his picture to an ad agency (I wondered if the parents got a cut). “They probably won’t buy it, but if you keep your name and your work before them, one of these days they will.”

Industrial Credibility: Less than Katie. Sharon uses a Speed Graphic (someday I’ll find out what that is) and reminds herself that if you make a mistake on the negative, you can’t fix it in the print. She also thinks about Matthew Brady, civil war photographer. And frets about a low ceiling with plumbing pipes in the background of a photograph.

Comment: Fascinated as I am by the world of work, those mystery plotlines seem unnecessary and tacked on. Enough with the kidnapping already! Tell me more about Nina Paxton, fashion photographer Nora Roberts (before her career as a romance author evidently), and how much you charge for photographing the Women’s Club Luncheon. My favorite details were probably the descriptions of the clothes Nina Paxton sells: “a stunning black velvet suit,” “a green and gray glen plaid skirt and a soft green cashmere cardigan” with “a scarf of the same enchanting green.” Then there’s the “pale pink wool dress with frosty collar and cuffs” which Sharon likes so much she buys (so I guess Nina did finally pay her something).

One thing I noticed about both books is how tiring photography is. Both Katie and Sharon are described as exhausted (all those late nights in the dark room) and both of them take naps (Katie falls asleep at work on Rolfe’s couch–naturally he just covers her with a blanket). Potential Camera Girls take note.

4 thoughts on “Shutterbugs: Katie and Her Camera and Sharon James, Freelance Photographer”