The Friday night lesbian feature at the Castro was violent, implausible, silly, and yet strangely satisfying. It was a genre picture (shades of this festival’s theme) in search of a genre; not quite sure whether it was an action or horror flick, and stumbling over some of the details essential to gratuitous violence films, like the black-humor one-liners a la Clint Eastwood or James Bond. Don’t we all secretly long to hear a lesbian say “Make my day?” 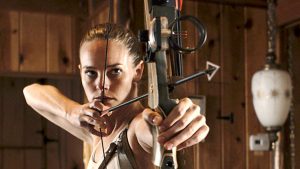 This shot recurred multiple times in the course of the movie.

A young woman is wrongfully incarcerated in a brutal rehab camp for juvenile offenders. She teams up with another rebellious inmate to overpower the sadistic father-son pair who run the place and escape. Because she’s a competitive archer, and the sadistic dad, coincidentally, is a former Olympian archer, bows and arrows are the weapon of choice. This  leads to lots of pinning people to the wall with an arrow through the hand. The theater filled with a universal “aaagghhh!” as the protagonist pulled her hand free over the arrow in order to release herself–the feathered bit at the tail end of the arrow gave a particularly horrific frisson to the moment. I find this kind of implausibility rather fun, but was irritated at other implausibilities, particularly the number of dumb moves the heroines make in the course of their escape, like lingering in the shower during a raid on the sadistic bad guy’s house, and twice choosing to hike rather than stealing available vehicles.

The film is “inspired by true events,” i.e. a judge convicted of taking kickbacks to sentence juvenile offenders in a for-profit rehab facility. Maybe this is a new genre, the social justice thriller? Adding another contradictory layer was the director’s introduction, in which she said that in these times if you weren’t making art that healed and bettered the world you were wasting everyone’s time. I sneered as people applauded around me; she’d basically dissed the whole world of late 19th century decadent French literature I’m immersed in right now. Who was Proust healing? But after the ridiculous blood bath that followed I forgave her; her remarks were so ridiculously implausible, so hilariously inappropriate, they became part of the entertainment.